On the train to Fes and Tangier

We caught a ride with Marie, the French owner of Dar Atif to Marrakech and we see a posher and more developed side of the city we hadn't seen yesterday. We caught the train to Rabat but we decided to continue onto Fes so we could stay there for 2 nights instead of 1. Train touts came to us, sat down in our compartment and started chatting about how they're educated, teaching at universities, married with a kid, then they would ask us where we're headed for and say 'oh I've got a cousin/uncle who owns a hotel in Fes' or 'my uncle's cousin is a tour guide and can show you around for a reasonable price'. We just brushed them off, we had agreed on a couple of pretty cheap hotels that we were going to try and get beds with but once we got to Fes, we were very hot (it was over 40c) and felt too buggered to walk around looking for beds with our backpacks so we just stopped by the first hotel we saw which was very nice and had a 'piscine' (swimming pool).
We had a look around Fes for a couple of days, saw the mosque, walked around the city centre, went shopping in the markets where we bought a couple of stuff, but our stay in Fes pretty much consisted of swimming and relaxing in the sun.
Then we caught another train to Tangier, the port of Morocco from Spain. The air conditioner didn't work on the train and so we were stuck in the sweltering heat for more than two hours. We would walk from our compartment to the middle carriage and pry the doors open and hot air blasted inside and it was much better than sitting down in stuffy air with 5 other people's stinky hot breath! 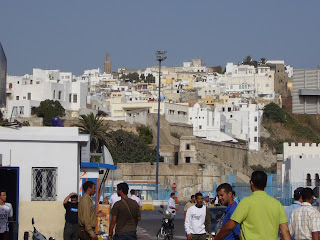 Tangier turned out to be a beautiful beachside city, it's very modern compared with Marrakech. We spent the only night there exploring the beachside shops, markets and people were selling things on footpaths. Melissa had a henna done on her foot, (the henna lasted for two weeks!). 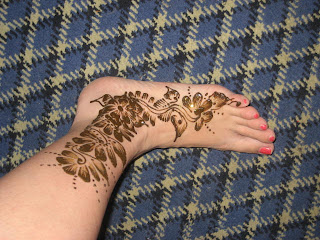 After a week of travelling, our time in Morocco was over and it was time to move onto Spain.