The story of May Pen

I've been travelling a fair bit around the Island for the last month for work. Most towns I visit, the devastation from hurricanes are visible, I don't even need to ask someone about what had happened I just automatically know from the appearance of the devastation.
Two weeks ago when I visited May Pen, I discovered an intriguing story. May Pen is of a moderate sized town about two hours north west of Kingston. This story centrals on May Pen School for the Deaf which was the purpose of my visit to the town. Last October, a hurricane came around, everyone scattered, the school had survived the impact but the May Pen town was badly hit. The school consisted of three buildings, one of the building had it's electricity cut off by the hurricane. After the hurricane had gone, some people from the May Pen community took it upon themselves to break inside the unpowered building forcing the security guard to resign out of safety concerns. They looted the building, took away resources meant for educating Deaf children.
There's reportedly some people still hiding in the building, the Principal refuses to send anyone inside. They are too scared, the building is now off limits to teachers and students. To solve the problem of providing a classroom for students, the principal moved them into the first and second buildings and thus, students are learning in an inadequate and overcrowded environment. 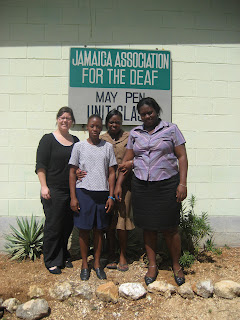 With some Deaf Teacher Assistants at May Pen

As seeing that May Pen is a school owned by Jamaica Association for the Deaf, they are currently trying to solve the situation and the first step is getting the electricity back. The costs run well into the JA$24 million which no one seems to have.

The hurricane season is from May to November, Jamaica often gets hit around October. It is now almost March, five months to the last devastating hurricane and the school still has not been fixed. I can imagine the Jamaicans getting tired of having to re do and fix damages caused by hurricanes year after year. I wonder what this year's season will bring?
Posted by Debbie at 6:15 pm