9th July
Arrived at Marrakech at 9am onboard Ryanair. The weather was hot but tolerable. We all didn't have enough sleep the previous night because we had to get up super early to catch our plane from London Luton so we were pretty tired on arrival at Marrakech. And to make our tireness worse, we had to haggle with taxi drivers for a price just to get to our hotel 33kms outside of Marrakech. The driver was scary, reckless with driving and kept on checking out Melissa who was sitting in the front, more than we could count.
Sarah was unsure of what to expect in Morocco, the first thing Bugge says about Morocco is that he cannot see anything beautiful about the country. I say to Bugge that we're here to experience their culture, Sarah says that she already hates their culture. This is just one hour into Morocco... sigh...
When we arrive at Dar Atif, our hotel, the driver tries to rip us off, saying that it's extra 50 dirhams for each of our backpacks, but Bugge stood his ground and say no, that we already had agreed on a price and surprisingly enough he went off without arguing more, a relief.
The Dar Atif Hotel is a nice place, nothing too interesting about it but we thought it was cool how they built it ontop of a hill and we had the whole floor to ourselves for a very cheap price. The owner was a French woman, we asked her many questions about Marrakech and the surroundings and she was very helpful but there were a bit of a language barrier. At that time we had not realised that understanding language would be even more harder once we stepped out of the hotel. There is nothing in English in Morocco, only French, Arabic & Berber. 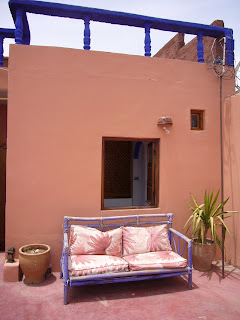 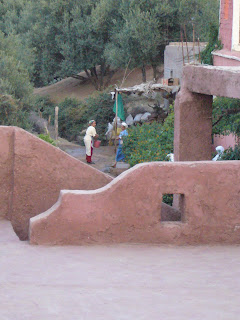 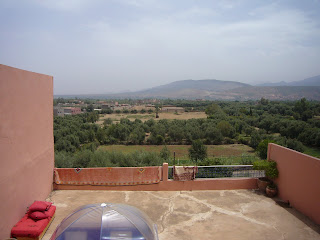 The view from our room

We walked to the market along very rough roads and past many men who would stare at us, call out and whistle. It took us about half an hour to walk to the market but we couldn't find anything that we needed there so we turned back, we were going to catch a taxi back to the hotel but Sarah & Bugge couldn't understand the Moroccans and they decided to give up and walk back to the hotel. By this point, Sarah was very tired, grumpy and really hated Morocco. Melissa and I tried our best to try and encourage her to no avail. Melissa and I then decided that we would go to the next village, which was approx. 20 mins walk in the opposite direction and find food & water while Sarah & Bugge would stay behind and rest. Melissa and I reached the first restaurant and our hopes are raised but then once we see their food, our hopes are crushed. They hang out their meat on sticks from the roof, and they cook outside in the heat with flies around. We asked the men there where we can get 'food' and they point us further down the road and away we went, we found another restaurant. This time the restaurant is decent and they had a menu, but alas, everything is in French. We mimed to the lovely man who was the owner and asked him what the menu said, and he goes around commanding his staff to show us which food was in French and how they were cooked. We finally chose edible food that we would eat ravenously! We ordered some more and got some 4 x 1.5 Litres of water, a bottle of coke and one of fanta and carried them back to the hotel for Sarah & Bugge. Carrying the water back was a bad idea because they warmed too quickly and we couldn't stand to drink it. 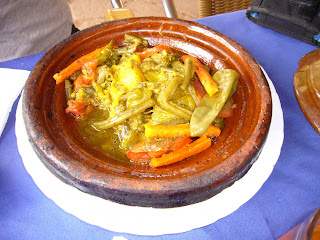 Can't remember what this is called, but it's a typical Moroccan dish

We retired to bed very early that night, but all of us are scared of intruders at our hotel, we didn't have locks to our room and there were a windowless hole in our room where cool air breezed through. Unfortunately for us, we had heard of many stories about Moroccan men and what they are capable of, and ontop of that our experiences today from the market. I checked our whole floor and came to the conclusion that nobody can climb the high walls to get in.

Breakfast at 8am consisted of what appeared to be a production of an American pancake but didn't taste like one. Marie, the Frenchwoman drives us to the next village where we catch a taxi to Marrakech city centre. It was so different to what we had seen around Dar Atif. We walked along a street, unsure where to head or what to look for, after a bit of ducking into and out of shops we decide to look for the mosque but we found it closed. A man in a nearby shop takes us into a herbal treatment shop where we saw thousands of herbs and ointments for every ailment you can think of. When we tired of walking along the souks we went to look for food but didn't find anything on this particular side of Marrakech so we decided to catch a taxi back to the village near Dar Atif and get something to eat. After eating, we bought a whole watermelon and carried it back to Dar Atif where we had some of it for dessert.

When we walk around on this side of the country, we encountered many things, men on donkeys, carts being pulled by donkeys, women in traditional moroccan clothes (they're muslims but they dress differently to women in different Arabic countries) and children on bike who would stare at us. We also had sheep as neighbours, a lot of Moroccan families keep animals such as sheep, goats etc on the roof when they're not eating and at night time. 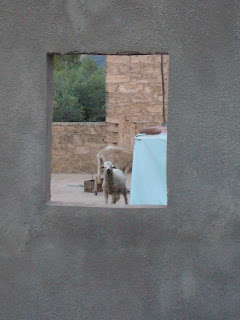 That night, we were extra scared and decided to sleep together in the same bedroom. I think I might have made the situation worse by telling Sarah and Bugge that I saw shadows of people walking past on my bedroom wall. Melissa was knocked out and didn't have a care for the world. Staying together was stifling hot because we had the door shut and the window 'door' shut and four bodies with hot air being expired.

Posted by Debbie at 1:13 pm No comments: