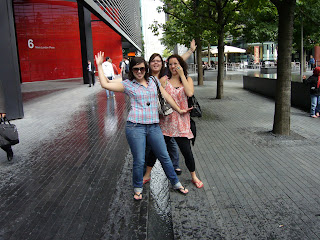 It was rainy old London (as usual) when I arrived at 6.40pm on 2nd July, I had to put up with rigorous questions from the immigration office because I am going to stay in the UK for more than 6 months. They grilled me about how much I had in the bank, if I had a job lined up, if not, have I joined a job agency?, where was I going to live, who am I going to live with? and do I have relatives in the UK? Somehow, I managed to pass the 'test' and they sent me to the Immigration Doctor who they said were going to ask me few more questions before I could get my passport back but all I just had to do was hand a nurse a form and the nurse typed something on the computer and stamped my form and said I was free to go and get my passport and enter the UK. I collected my bags and then went straight to Piccadilly Circus where I met up with Melissa, Sarah, Bugge and Ben.
We then went to Melissa Connor and Mazen's flat in Maida Vale, I am going to stay with them for a week before we head off to Morocco. Another friend from Melbourne, Shel was also staying with them and we had a long catch up before retiring for the night (should I say morning instead?).
On 3rd July, I had something called half of both an interview and a meeting with SIGN Charity, the organisation that Melissa worked for. I met up with a manager there and he has said that I can work as a bank staff at two of their houses (they provide care for residents with mental health issues). They call casuals 'bank staff' here! This is a good thing, having something that I can work for but I am still going to look for a fulltime job to be able to live in this expensive city!
After the meeting, Melissa, Sarah, Bugge & I went to London Tower Bridge. I have not actually been this close to the Tower Bridge, in the past I had seen it from a distance. There were also art displays of guitars near the Thames River bank. The 'Art' were large painted guitars and signed by famous musicians, I saw one signed by Paul McCartney. We mucked around and took silly photos, I was very tired from the jetlag and Sarah was sick with the cold. 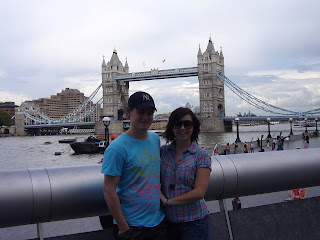 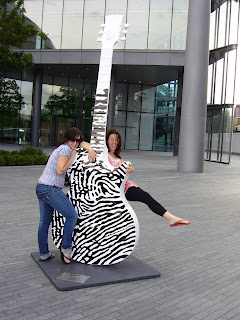 Sarah & Melissa with a funky guitar 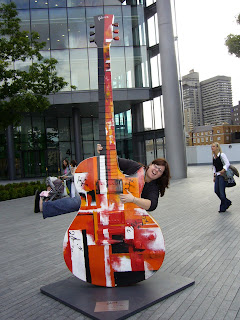 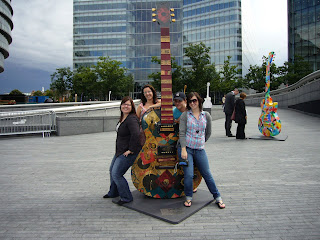 The four of us!
After that, we went to Green Park tube station to meet Donna & Mike from Australia. They are staying at Melissa's flat now (it's full over there!). But unfortunately for Donna & Mike, they got lost at Green Park and it was a very long time before we finally met up (they are safe now!). By the time, we found Donna & Mike, I had to go back to Maida Vale to go and play netball with the London Deaf Netball Team. It was my first match and their first match for the season so perfect timing. I had asked Melissa C what colour to wear to play, and she said 'any colour, it won't matter, wear tracksuit pants and a t-shirt and it should be fine'. So I picked the most comfortable and sporty clothes I had and went off to netball with Melissa C and Shel. We played our game outdoor in the rain, some players were wearing raincoats, and I had my thick jacket on. I only could tell the players apart by looking at their bib (thank god for different coloured bibs). I played defence with Melissa C, it was good to play with her again, we had played together before in Australia. We won the game 16-5!

Melissa C, Shel and I were starved after the game, we decided to have souvlaki and just chill out before heading home. I came back to the flat with my pant half wet, matted hair, soaked socks and wet runners and had a very hot bath which then made me more tired than I already was!

That night we had two Japanese friends stay over with us, Yumiko and Satsuko (?), by the time they arrived before midnight, I was already tired and decided to go to bed a bit early this time! They with Shel went to Barcelona today to travel around Spain for a bit before the WFD in Madrid.
Posted by Debbie at 3:04 pm

Good for people to know.