We had booked a tour of three attractions with Golden Tour for the day. I woke up early and caught the bus from Maida Vale to Victoria station where I was to meet up with my sisters but the bus did not go all the way, it stopped at Park Lane and we all had to get off, I asked the bus driver what was happening and he said 'you have to walk to Victoria, it's about 10 mins away', and so off I went fastwalking because I only had about 10 - 15 mins left before meeting with the others. As I walked, I saw barriers being set up, police patrols and such and then I saw a banner saying 'Tour de France- Major London roads closed 6th/7th/8th July'. After a bit of walking distance, I didn't know where to turn so I asked a copper where Victoria was, and he gave me directions and said it was a good 10 minutes!
I reckon I had walked about 20 mins before arriving at Victoria and met up with Melissa, we rushed to the bus station (Victoria is a large station, it has trains, tubes, bus and river ferry stations). Our tour bus left at 9am and headed straight for the Stonehenge, it was about 2 hours before we got off the bus, the roads were very congested. The tour guide said that because it was a Saturday and other people had the same idea as us, visiting the Stonehenge or going to the beach for the day. The group split up individually, we had information brochures and were told the time to meet back at the bus for the next attraction tour. Melissa, Sarah, Bugge & I went off on our own under the freeway and onto the other side of the road, for the Stonehenge. I had a book script with history and such of the Stonehenge which I found very interesting.
There are many myths about why the Stonehenge was built, and what was it used for and nobody really knows why! However, they do know how they brought the stones there (they came from Wales) and how they built it. It was built around the same time as the pyramids in Egypt about 5,000 years ago. But the Egyptians were more clever and used papyrus to tell their story, and the English didn't have anything. The Stonehenge were already there way before the Romans invaded Britain, it's how old it is! 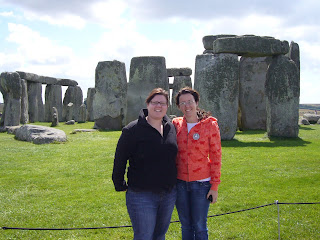 After finishing at the Stonehenge, Melissa and I went back to our bus (we had split up with Sarah and Bugge), and could not find them on the bus, the tour guide did a head count and there were some people missing. Melissa rushed out of the bus to find Sarah & Bugge, but it didn't take her long to find them and they were last on the bus and we left Stonehenge minus two tourists. The tour guide said that we couldn't wait any longer, and those two people would have to find their own way back to London. This served as a warning for Sarah & Bugge!!

It was only 15 minutes before we arrived at Salisbury, we headed into a pub for a traditional english lunch, bangers and mash. The look of it was awful and we only could eat few bites before feeling sick. We then made our way to Salisbury Abbey, it's the tallest church in England apparently. You can find the Magna Carta there, it is Latin for 'Great Charter'. It is an agreement that was issued in 1215 between King John, Pope Innocent III and King John's English barons. Before the charter, there were a lot of disagreement between the church and the monarchy about the rights of the King, the Magna Carta forced the King to renounce some rights, respect legal procedures and accept that he is to be bounded by the law. This agreement has had a great influence on our consitution law today. 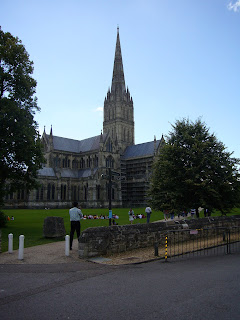 We left behind 4 more people at Salisbury when we headed for Bath.

It was quite a drive to Bath, but there were some attractions along the way that we could see from the bus, I remember seeing a chalk impression on a hill of an Army hat under a sun. The tour guide said that it was in tribute to the Australian Army. The tour guide talked a bit about the traditional British thatch roof, and how expensive it is to build it because not many people are skilled in making thatched roofs. If you wanted to learn the skill, you can't go to a school, you have to find someone with the skill and learn it directly from them and thus it's so expensive and rare to find a thatcher. Also, I found another interesting thing about the Britons, back then what the man's occupation was, it is also his surname. For example, with Margaret Thatcher, we can say that her husband's forefathers made thatched roofs.

Upon arrival at Bath, we headed straight for the Roman Baths, and again the tour group split up individually so we were free to explore on our own time. Extensive history can be found about the Romans in Bath, the Roman Bath were built by the Romans over 2,000 years ago but they departed and the region was claimed by the Saxons and they built additional temples and such over the bath. Normans then invaded the region and built more over what the Saxons had built. I remember seeing something about that the town of Bath had grown 6 metres from original ground over the years with each generation building their own lives ontop of the ruins of the past. 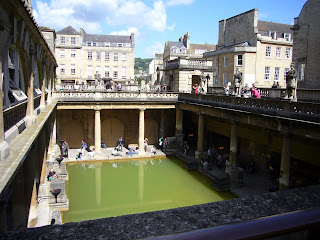 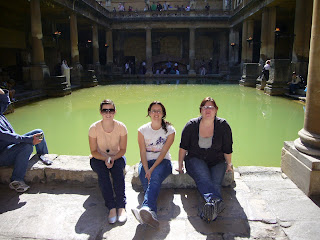 Relaxing by the main Roman Bath

After exploring the baths, we tried some holy water. I had imagined fresh cold delicious water, but instead it was warm almost hot, smelled of natural underground elements (like iron) and tasted very thick. I could only manage to have several sips but had to leave it. I most definitely won't be cured!!

The four tourists that we had left behind in Salisbury managed to catch a train to Bath and catch up with us! But then unfortunately our bus had a flat tyre and had to be fixed, and only some of us were lucky enough to catch a differen bus but with the same company back to London. We got off at Gloucester Road at 8pm, it was a long day but very good.
Posted by Debbie at 4:50 am